A couple of weeks ago, there was an article in the Business Daily that has cost me many nights of sleep and much consternation. That report has been a major distraction in my mind these past couple of weeks that I almost have been able to really think of little else. The article quoted the Knight Frank Wealth Report 2021, which has it that it takes USD 20,000/Kshs. 2.2 million to join the top 1 percent of Kenyans in wealth.

“The top 1% — frequently cited, sometimes maligned, but never really defined. The level of net wealth that marks the threshold for entering this rarefied community varies widely among different countries and territories… Developing economies Indonesia and Kenya have thresholds… at US$60,000 and US$20,000 respectively,” said the report.

This led me to try and do the math. Kenya’s population aged 15 years and above per my calculation is about 31.1 million. According to the Census of 2019, the population of Kenya was 47 million and it is widely estimated to have grown to 52 million. Basic arithmetic then puts that the top 1 percent of Kenyans at 311,000 (if you take the top 1 percent of people who have the capacity to have income) or between 470,000 Kenyans and 520,000 Kenyans. For the sake of this discussion, let us go with the figure of 500,000 people.

Let us look at some data that might help us to corroborate this. There are reportedly 2.92 million workers in formal employment in Kenya. It is reported that “56 percent of Kenyans working in the public service took home less than Sh30,000 (US$300) compared to 46 percent of their peers in the private sector and 48 percent of county workers.” These average out to 49 percent of all workers in the formal sector. To make matters even more grave, 1,346,555 workers earn less than Kshs. 25,000 (USD 250) according to the same report.

The Kenya National Bureau of Statistics report, released in December 2020, showed that agriculture, fishing, forestry, information technology (IT), education, security and transport sectors make the list of industries with the highest number of workers taking home less than Kshs. 10,000 (USD 100) a month.

By contrast, the Knight Frank Wealth Report shows that there are only 90 Kenyans who qualify for the Ultra High Net Worth Individual (UHNWI) category—people with a net worth of over Kshs. 300,000,000 or USD 30 million including their primary residence. The High Net Worth Individual (HNWI) category—people with a net worth of Kshs. 100 Million (USD 1 million)—had only 3,323 Kenyans.

Where most Kenyans fall

If you do rough arithmetic and take the number of people who could earn a living in Kenya to be 31.1 million, and simplistically subtract the top 1 percent and all of these people that we can account for as in the image on the right, you are still left with almost 13 million people who could earn a living that we cannot account for. Obviously, my math is not remotely statistically accurate, but I don’t think my point is far off. 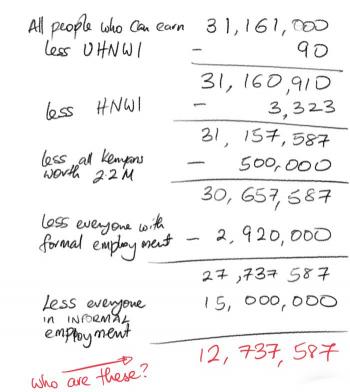 Generally, there are key features that could be attributed to most of these Kenyans who are left behind. Many of them live outside the cities and in the very rural areas. Many of them a massively under-educated and they blame their circumstances on the devil or (in the case of my coastal people), ghosts or majini. Many of them live on or near high value natural resources—agricultural land, minerals, water bodies—but they do not take full advantage because of ignorance.

What does this mean?

My friend David Sasaki wrote a blog post in 2012 where he wondered if people could be brought to care about how their taxes were spent. In considering what it would take, he says: “First, raw data is not enough—we need visualizations to understand it. Second, visualizations are not enough—we need journalists to investigate and tell stories about the data. But is telling stories enough?” He pointed to OpenSpending.org, which in those days, was an innovative tool in the UK, that could calculate how much taxes you paid, if you entered your salary. We tried to do the same thing with a tool called Kobole back in 2018 that found that many Kenyans spend about half their salary on PAYE and other sales taxes. The top 1 percent of Kenyans, paid less in ratio than the lower cadres.

I contend that most Kenyans—even many educated ones—cannot comprehend information about what is done with their taxes, and this opens the way for the political class to wantonly run roughshod over their development needs. Unfortunately, it is fully understandable because three key issues.

First, most Kenyans do not take ownership of their taxes and their role in the scheme of development. As we have been doing our citizen generated data work in various communities in Kenya, it has been interesting observing communities debating the answer to the question “between you and the president, who is the boss?” In most cases, my experience has been that people did not see themselves as owners of the country and the resources managed by their leaders.

Secondly, there exists massive ignorance that is fueled by under-education coupled with the deep frustration of citizens who do not believe that their opinion matters in matters development. They see their leaders as operating on their own wavelength and it is not uncommon to hear a Kenyan say to another, “when the politicians want something they will get it tupende, tusipende (whether we like it or not).” It is a common belief that citizen issues are likely to be taken somewhat seriously around the time of the elections. Most of these Kenyans did not get quality education — even those who succeeded to finish high school. The Uwezo literacy and numeracy studies have been great barometers of the levels of education of the people.

Third, most Kenyans are simply too busy trying to get by, to take the time to study trends as may be presented in the most simple visualizations or concentrate on stories relating to pending data. In particular, I think they also give it a miss because hearing about misuse of data leaves them with a negative taste in their mouths. In a study that we conducted in Kenya in 2014, we found that Kenyans find it difficult to care about spending that happens at national or regional level because “I have never seen a Million Shillings, how will I know what a Billion Shillings could do, or whether it has been wasted?” Instead, citizens could better relate with spending information if it was in the hyperlocal scale because they could relate to the figures. Only the top 1 percent may concern themselves with these matters.

As we talk about the notion of ‘leave no one behind,' there is no doubt we have work to do.